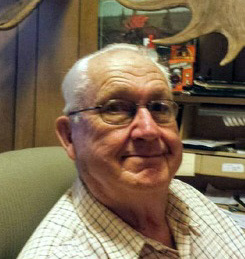 Bob, the 10th child of William Frederick Dailey and Mary Haywood Dalton Dailey, was born on October 1, 1932 in Dover, Arkansas. His parents and his four brothers and five sisters preceded him in death. His Maternal Grandfather, Lacy Dalton was an attorney in Plainview, Texas. His Paternal Grandfather, William Pleasant Dailey built and operated a hotel in Floydada, Texas for many years, where Bob's mom and dad and his sisters also worked. Little Bobby did odd jobs around the hotel for spending money that he used to go to the movies on Saturdays. When he as 8 years old, the family moved to Ash Flat, Arkansas, where he grew up, helping on the farm. He graduated from Ash Flat High School in 1950.

Soon after graduating high school, Bob joined the Air Force in Washington DC and after two years of administrative and intelligence work, he became the youngest person to be appointed as a Special Agent with the USAF Office of Special Investigations. He was stationed to Ent AFB in Colorado Springs where he met and married his wife, Irma Mikita, of Ramah, CO. They were married for 49 years before she passed away in 2001. To their union were born six children, Vickie Lynn Pasko-Tipton (Danny Tipton), Ramona Jean McMaster (Larry McMaster), Ann Marie Preiss (Joe Preiss), John Frederick Daily (Theresa Klee, d. Dec 2020), Glen Paul Daily (Cheryl Moore), and Patty Inez Quintana (Lino Quintana). He had nine grandchildren and nineteen great-grandchildren.

Bob had a distinguished 25 year career in the military. After 12 years as an OSI Special Agent in the Air Force, he transferred to the Army as a Warrant Officer and a Special Agent with the Army Criminal Investigation Division. He served in this position until his retirement as a Chief Warrant Officer CW-3. He served in Korea twice and served through his final assignment as a instructor at the Military Police School in Georgia, where he was designated a "Distinguished Instructor". His military decorations included the Legion of Merit, Army Commendation Medal, Air Force Commendation Medal, as well as several other service medals and commendations. He was the Honor Graduate at the Army's CID School, setting an academic record for that course.

When he retired from the military in 1975, Bob and Irma moved to Valdosta, Georgia, where he lived for 43 years. Bob built up his polygraph business into a successful venture. He conducted polygraph examinations for numerous businesses, law enforcement agencies, attorneys and individuals in Georgia, Florida and Alabama. He was often sought out to testify as an expert witness in local, state, and federal courts on polygraph and investigative matters, including some high profile Federal cases. He was a full member of the American Polygraph Association. He also has written numerous articles on the polygraph which have been published in regional and national publications.

In 2018, wanting to be closer to his children, Bob moved west to Washington state to live with son Glen and his wife, Cheryl for six months. He then moved to California to live with his daughter, Ramona and her husband Larry. He resided there until passing away. He always missed living in Georgia and the friends that he had made in Valdosta.

The above information includes details from here at the time of posting.