Ken and I were together in Vietnam, and Esther and my family were together at Schilling Manor at Salina, Kansas. All I can say is that Ken was a fine man whom I loved dearly.

Peter Comras mentioned that Ken Bowles was "one of a kind". Yes, he was. When God made Ken He broke the mold and cast it away. Ken was my Ops Officer at the 89th CID, Ft Jackson, SC in 1955,
56 & 57. If you're doing the math, that's 59 years ago. I was 26 and Ken was 36 at that time. I left on an unaccompanied tour in 1957, leaving my two year old son and Japanese bride behind. Ken and Esther took them under their wings and ultimately drove her to Atlanta to obtain her U.S Citizenship. We have been forever grateful to them for that. Ken Bowles was the kindest and gentle man that I have ever met. I am a better person for having known him. May he forever rest in peace. Our sincerest condolences to Esther, Linda, Kathy, Robert, and Norman. Carl and Hiroko Craig

This is a posting I regret reading. I worked for Ken in the mid 70's at Ft Huachuca and Paige and I lived across the street from him and Ester on post. Ken was simply one of the greatest "bosses" I ever had. My sympathy to Ester and the rest of the family. I'm sorry I was not in AZ where I could have attended the service. RIP Ken. We will all be with you someday. 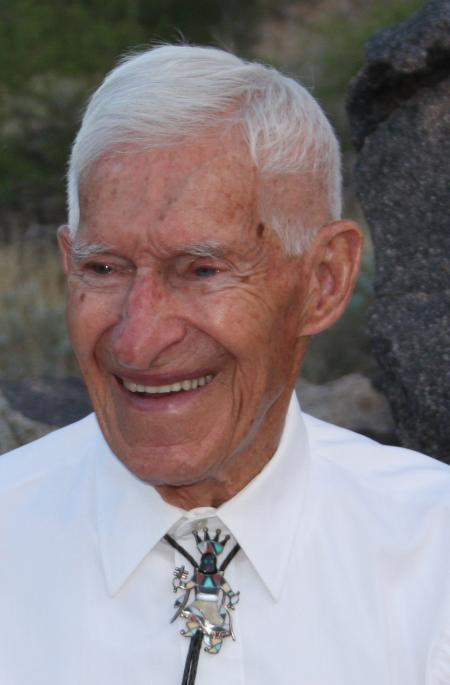 Folks,
We again lost a one-of-a-kind in Special Agent "Ken" Bowles. I worked with Ken in either the mid or late-60s and or later in the 70s in the D.C. and or on my many TDY trips all over the world. I believe, however, it was in the D.C. area, albeit we could also have run into each other in all our many travels during those years. In any case, Ken was a well known, well liked and one of the best CID Agents anywhere.
Rest in Peace my beloved brother--you certainly and absolutely earned it!
Peter "B"

Follow up information not in the published obituary - Ken passed away on 20 December 2013 and his wife, Esther, survives.

If nothing else, Kenneth Herbert Bowles, was a lover of life and strived to make the most of the time while he was here on Earth. He lived 95 years, 3 months, and 2 days. Undoubtedly he would say, if asked, most important to him was his partner in love and adventure for 67 years, Esther. He hugely cherished his four offspring, Linda, Kathy, Robert, and Norman; his eight grandchildren, and one great grandchild — all to whom he imparted a vital part of his indomitable spirit. And, he would quickly add, he would never trade his many friends in Sierra Vista, nor those spread across the globe.

He completed two full careers back to back. The first consisted of 30 years in the military heading various Criminal Investigation Detachments (CID) around the world. He served in three wars: WWII, Korea, and Vietnam, and had managed units in Belgium, Germany, Japan, Okinawa, and at various military bases in the USA. In his second, he managed the alcohol and drug abuse prevention program at Fort Huachuca. After 25 years in this role he retired from his position at age 83.

In his many roles in life he was — among other things — a scuba diver, college professor, Boy Scout scoutmaster, businessman and investor, journalist for the Sierra Vista Herald, professional photographer, president of the local Filipino Club, a loyal Kiwanis member, and a huge fan of Sierra Vista and its surrounding environment. The day he passed, the Earth’s energy declined a measurable notch — an event scientists at the United States Geological Survey could not explain. We love him and we will miss him.

Vigil services will be held on Dec. 24 at 11:30 a.m. at Hatfield Memorial Chapel at 830 South Highway 92 in Sierra Vista. Military honors will follow at 1 p.m. at Southern Arizona Veterans Memorial Cemetery. (Thanks to Bill Evans)