I first met Archie and his family at Ft. Jackson, SC in the mid 70's he was our polygraph operator. He and I became very close friends. After his retirement we did not see each other again. I found him again after his move to Montana. We spoke and I found he was very ill at that time. I later called to find that Charlene had passed and he was with his daughter Susan and her family. I lost contact after that. Susan and Raymond please know that we love you very much and send our condolences.

Here's a picture of a young Archie 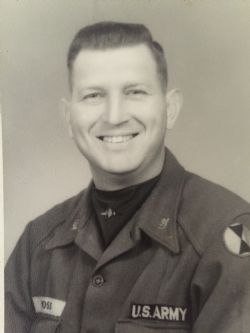 First met Archie in mid to late 1977. He was SAC at Augsburg RA. Really good man. Enjoyed knowing him. Rest in Peace, Archie. Expect to see you up yonder.

Archie Eugene Moss, age 79, who was born in Lincoln, Kansas and a resident of Lewistown, Montana, passed away on April 1, 2015. He grew up on a farm in Wyandotte, Oklahoma and traveled with his family harvesting wheat from Canada down the wheat belt to Texas. He graduated from Wyandotte High School in 1954. Archie volunteered for the draft in 1954 and served in the U.S. Navy on the USS Thomason. He was Honorably Discharged in 1959. Not wanting to return as a Boiler Tender on a ship, he then joined the U.S. Marines. He was Honorably Discharged from the Marines due to a severe knee injury. During his recovery period he married his wife Charlene Haggard Archie missed the military life and soon enlisted in the U.S. Army. He made the Army his career. He served in Vietnam, and was the recipient of the Bronze Star with Valor among other military honors. He was a happy, gregarious man with lifelong friends made from around the world as he traveled from Army Base to Army Base. He was a loving father, husband and an awesome "Opie" to his grandchildren. Archie was survived by his daughter, Susan Moss Hayden and her husband Robert F. Hayden of Baton Rouge; and one son, Raymond Sheldon Moss and his wife Janellee Ball Moss of Denver, Colorado. Archie enjoyed six grandchildren: Emily Hayden, Ellery Hayden, Scott Moss, Chelsea Moss, Colin Moss and Gavin Moss. He is survived by one sister, Wanda Moss Patterson of Salina, Kansas. He is preceded in death by his wife, Charlene R. Moss; his parents, Archie and Amanda Moss; one son, Larry Eugene Moss; one sister, Betty Moss Hughes. He was dearly loved and will be missed by all who knew him. Family and Friends may sign online guest book or leave a personal note to the family at www.resthavenbatonrouge.com. - See more at: http://www.legacy.com/obituaries/theadvocate/obituary.aspx?n=archie-eugene-moss&pid=174559009&fhid=1 7444#sthash.vK2I9ymg.0cvGCnzO.dpuf